Gary Barlow…proves himself a master of solo performance 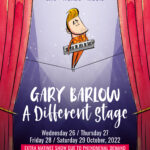 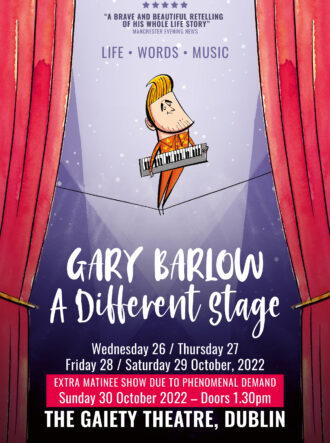 Acclaimed singer, songwriter, composer and producer, Gary Barlow today announces a host of new dates for A Different Stage, his theatrical one man stage show telling his story, in his words. A Different Stage premiered at The Brindley, the award-winning theatre in Runcorn, Cheshire, in February to a rapturous reception from his delighted fans. He has since played to sell-out audiences in Salford, Liverpool and Edinburgh and has announced his West End debut at the London’s Duke of York’s Theatre in August. Today Gary confirmed a brand new run of shows which will see him perform at Dublin’s Gaiety Theatre from 26th – 29th October 2022

Created by Gary and his long-time friend and collaborator Tim Firth, A Different Stage sees Gary narrate the journey of his life alongside the music from his incredible discography. In a project unlike anything he’s ever done before, Gary will take the audience behind the curtain, with nothing off limits in this special performance.

Gary Barlow is one of Britain’s most successful songwriters and record producers. As part of the group Take That, he has won eight BRIT Awards and sold over 45 million records. Aside from his achievements with Take That, he has also co-written and produced music for other renowned artists including Dame Shirley Bassey, Sir Elton John and Robbie Williams.

In more recent years, Gary has also turned his attention to the world of theatre, composing the score for the hugely successful production of ‘Finding Neverland’; working alongside Tim Firth on  ‘Calendar Girls The Musical’; and collaborating with Tim and his Take That bandmates on ‘The Band’, a record-breaking stage musical currently being adapted into a feature film.

Age Guidance:  suitable for all ages

Doors to the venue open one hour before every performance.

Please note as this is not a concert. There is no support act so the performance will begin on time.

Please arrive early to ensure you have time to get to your seats.

This is a fully seated performance.

If you arrive late for the performance, you will not gain entry immediately and it can not be guaranteed that you will be able to gain access to your reserved seating. The latecomer’s points are approx. 8 minutes and 22 minutes into Act one.

Bars and Kiosks
Our bars and kiosks will be open before the performance and at the interval, however we cannot guarantee seating and service for everyone so please arrive early to avoid disappointment.

Security will be present throughout the venue. Each person can bring one small bag to the venue, no bigger than A4 size.