“Every time Stephen Daldry's great production of this JB Priestley play returns, its power and pertinence feel all the more striking.”

“I never tire of watching it. That’s partly because it looks astounding, but it’s also because it builds on the crusading provocation of Priestley’s 1944 original – an Edwardian thriller with a socialist purpose, tinged with a supernatural spin. An Inspector Calls always speaks to the changing political moment.”

Dominic Cavendish for The Telegraph Nov 10 2016

“Stephen Daldry's epochal Priestley production returns - and what a spectacle: this is bold, thinking, populist theatre, designed to entertain but also to boot you up the bum and shake the complacencies out of you.”

“An Inspector Calls is a monumental, timeless image, reminding us that ‘community and all that nonsense’ should never be disregarded.” 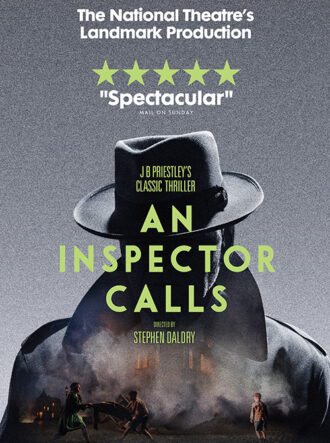 Since 1992, Daldry’s production of An Inspector Calls has won a total of 19 major awards, including four Tony Awards and three Olivier Awards, and has played to more than 4 million theatergoers worldwide. An Inspector Calls is the most internationally-lauded production in the National Theatre’s history.

Written at the end of the Second World War and set before the First, An Inspector Calls is a compelling and haunting thriller. The story begins when the mysterious Inspector Goole calls unexpectedly on the prosperous Birling family home. Their peaceful family dinner party is shattered by his investigations into the death of a young woman.

Now world-renowned as one of Britain’s leading theatre and film directors, Stephen Daldry has received Academy Award nominations for his films The Reader, The Hours, Billy Elliot and Extremely Loud and Incredibly Close. His recent West End theatre work includes David Hare’s Skylight at the Wyndham’s Theatre and Peter Morgan’s The Audience at the Apollo Theatre. His multi award-winning production of Billy Elliot The Musical ran for 11 incredible years at the Victoria Palace before embarking on a national tour.

Featuring Ian MacNeil’s ingenious designs, music by Oscar-winning composer Stephen Warbeck (Shakespeare in Love) and atmospheric lighting by Rick Fisher, this landmark production is guaranteed to have old fans rushing back and new theatregoers being swept away into the mysterious world of Inspector Goole.